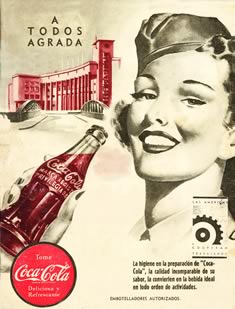 Advertisement of the 1940s

Embotelladora Andina is born with the license to produce and distribute Coca-Cola products in Chile. Transition from the individual bottle towards the 24-bottle case (today known as unit case). 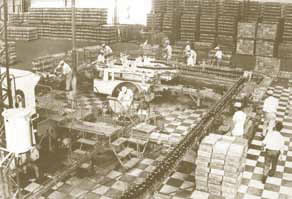 The San Joaquín Plant is inaugurated in Santiago. Acquisition of a 45% ownership interest of Embotelladora Concepción. 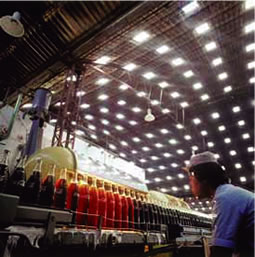 The Company acquires an additional 46% ownership interest of Embotelladora Concepción.

Acquisition of a 34% ownership interest of Embotelladora Talca.

Acquisition of Termas Mineral de Chanqueahue and the brand Agua Mineral Vital. Ownership interest of Embotelladora Talca increases to 80%. Creation of the Premio de Periodismo Andina (Andina Journalism Award) which aims to recognize the journalist who has distinguished for the professional and ethical quality of his/her work.

Operations begin at the Chanqueahue Vital production facility in Rengo and at the plant of Embotelladora Concepción in Temuco. 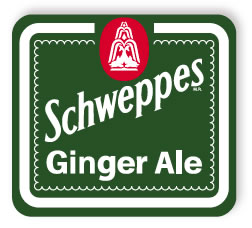 In September of 1979, Andina is granted the Schweppes franchise 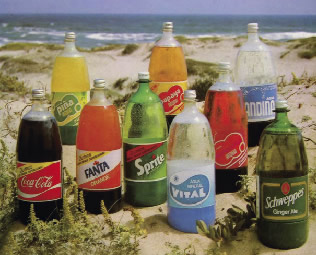 The "plastishield" format is introduced in Chile, the most modern non-returnable format world-wide.Launch of the diet sodas TAB and Sprite Light.

Sale of the bottling plant at Viña del Mar. 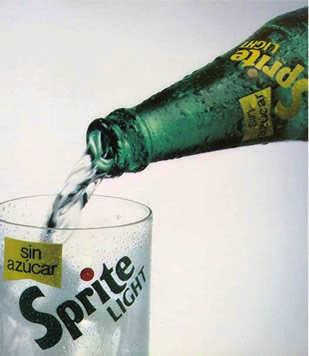 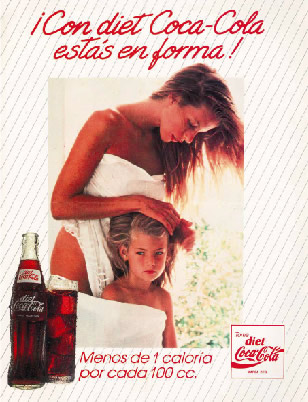 Envases Multipack is born, a company dedicated to the packaging business .

Vital is born, dedicated to the business of juices and mineral waters in Chile. Andina acquires a minority ownership in INTI, a bottling company of Coca-Cola products in Córdoba, Argentina.

Placement of 7,076,700 American Depositary Receipts (ADRs) on the NYSE, collecting US$127 million. Entrance to the Brazilian market begins with the acquisition of Rio de Janeiro Refrescos, a bottling Company in the city of Rio de Janeiro, with a plant in Jacarepaguá. 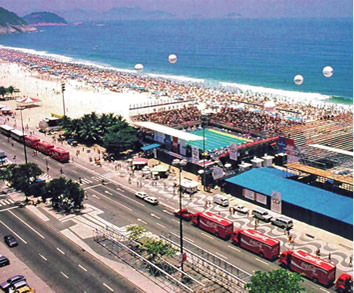 Envases Central begins operations. Entry to the Argentine market continues with the acquisition of Embotelladora del Atlántico, controller of the Coca-Cola bottling facilities for the territories of Rosario and Mendoza.

Execution of a stock split creating series A & B shares. Acquisition of an additional 5% stake in EDASA. Yankee Bonds for US$350 million are issued in the U.S. market in tranches of 10, 30, and 100 years.

Inauguration of the Montecristo production facility in Córdoba, Argentina. 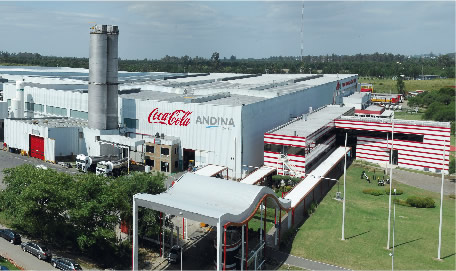 Acquisition of the Coca-Cola bottler for Niteroi, Vitoria and Governador Valadares in Brazil.

Joint Venture between Multipack and Crowpla creating Envases CMF for the packaging business. Andina issues UF 7,000,000 in bonds in tranches of 7 and 25 years. Tender offer for the partial repurchase of bonds issued abroad.

EDASA concentrates its productive operations at the Montecristo production facility in Córdoba and shuts down the plants in Mendoza and Rosario.

EDASA absorbs CIPET. Andina is granted the important Carlos Vial Espantoso award, which distinguishes the most relevant Chilean Company in terms of labor relations and with more dedication to human capital. 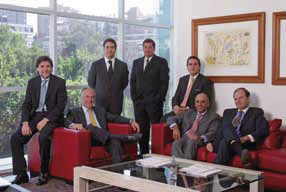 In the year 2000 the Company achieved third place of the Coca-Cola System Quality Index in Latin-America.

Rio de Janeiro Refrescos and a subsidiary of The Coca-Cola Company in Brazil carry out a franchise swap of the Governador Valadares franchise in the State of Minas Gerais for the Nova Iguaçu franchise in the state of Rio de Janeiro- Series B shares of Andina become eligible as investment instruments for the Chilean Pension Funds (Series A shares have always been an eligible investment instrument).

Vital's water business is separated, creating Vital Aguas. Thus, Vital exclusively develops business of juices and other non-carbonated beverages, while Vital Aguas along with the other Coca-Cola bottlers in Chile, is dedicated to the water business. 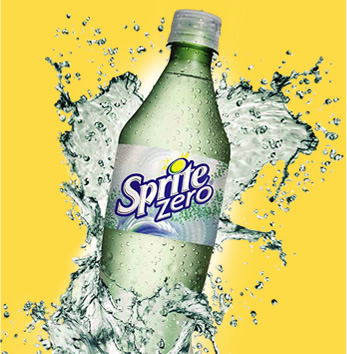 Andina highlighted the success of Sprite Zero and Coca-Cola Light Lemon as extensions of the low-calorie line. 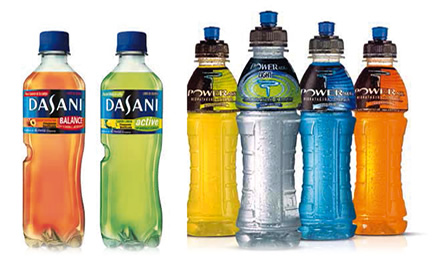 In 2006 functional and specific products are integrated to our strong family of products.

The Company obtains the Premio Nacional a la Calidad 2005 (2005 National Quality Award), granted every year by the Presidency of the Republic of Chile, becoming the first company of the mass consumption sector to achieve this award.

Andina inaugurates Maipú and Puente Alto Distribution Centers in Santiago. The Coca-Cola Company creates the Mais Indústria de Alimentos joint venture along with Coca-Cola bottlers in Brazil, for the production of non-carbonated beverages for the entire System in that country.

Andina incorporates the Benedictino brand to its water portfolio in Chile. In Brazil through the Mais joint venture, acquisition of the Sucos del Valle brand, leader in the juice segment in this market.

Andina commemorates its 15th Anniversary of listing on NYSE. In Argentina we received the Premio Nacional a la Calidad de la República de Argentina (National Quality Award of the Republic of Argentina); the highest recognition granted to private companies and public organizations. 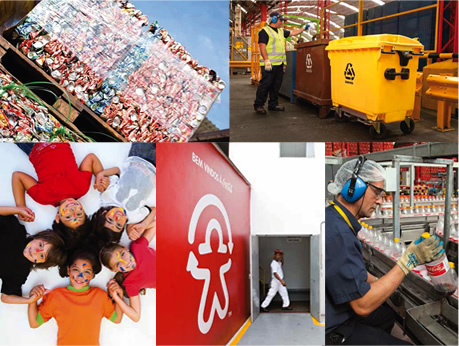 Andina commemorates 65 years and the new bottling facility in Chile begins operations. The juice business is restructured and Vital becomes Vital Jugos, a joint venture with the other Coca-Cola bottlers in Chile. 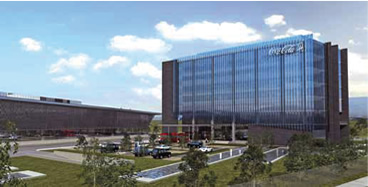 2011 The most emblematic investment was the construction of the new production plant in Renca.

Materialization of the merger with Embotelladoras Coca-Cola Polar S.A., and acquisition of 40% of Sorocaba Refrescos in Brazil. Change of corporate image to Coca-Cola Andina.

Acquisition of 100% of the shares of Companhia de Bebidas Ipiranga in Brazil. Additionally, Andina issues UF 5,000,000 in bonds in tranches of 7 and 21 years in the Chilean market and US$575 million 10-year term bonds in the U.S. market.

The Company begins the distribution of Monster Energy products. 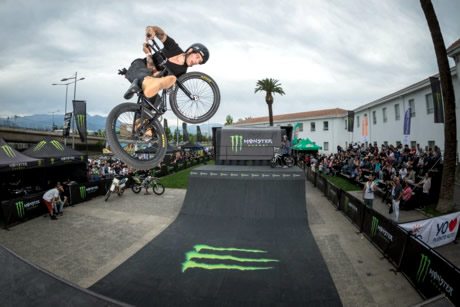 The Coca-Cola Company together with its bottlers in Latin America announce the closing of the acquisition of Unilevers AdeS vegetable protein drinks business.

Andina Chile begins the distribution of alcoholic beverages owned by the Diageo group.
The purchase of 100% of Comercializadora Novaverde S.A., a company dedicated to the processing and marketing of fruits, ice cream, vegetables and food in general, mainly under the brand Guallarauco materializes.
The Company issues an amount of UF5,700,000 in 21-year bonds in the Chilean market, and a partial repurchase of the issue of bonds issued by the Company in 2013 in the US market. 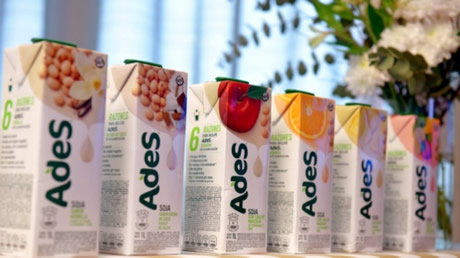